Jonathan Djanogly MP, Chair of the All-Party Parliamentary Group for Georgia, writes for The House Magazine.

There is no doubt that Georgia is a West facing country that desires to be part of the wider family of free and democratic countries with western values and economies.

It is a young democracy and has a somewhat politically polarised society – but united, with huge polling majorities, in their wish for membership of the European Union and also Nato.  In fact, both aims have now been written into their constitution and like with Ukraine, a formal EU membership application has now also been made. This builds on their existing EU Accession agreement and their three month EU visa which, again, they entered into at the same time as Ukraine.

The intransigence, brutality and violence expressed by Russia under Putin – did not start with Ukraine in 2014; rather it started with the Russian invasion of Georgia in 2008. An invasion largely ignored by the West.

If Ukraine were to go neutral, then Russia’s attention would be drawn to Georgia – possibly with disastrous implications for Georgian security.

As a result, to this day, some 20 per cent of Georgia is occupied by Russian troops and Georgia still supports over 250,000 IDP’s.  The pattern of Russia’s use of disinformation and cyber warfare, its escalating use of agent provocateurs, special forces and then devastating slash and burn techniques.  All of this has consistently recurred where Russia has meddled.

Russia’s plan: to have weak corrupt and malleable puppet states, that it preferably doesn’t have to pay for, to act as buffers on its borders.

In response we gave Ukraine military training and other aid, but not until recently weapons.  So, the question needs to be asked – would Putin have attacked if Ukraine had received the means to fight back then as it has now?  Would so many people, some 8,000 civilians so far, have been killed?  Would such physical and cultural destruction, as we have seen, happened?

I note that both Ukraine and Georgia have been receiving high level assistance from the UK to counter cyber warfare.  The prediction in the first days of the February war was that Russia would wipe out Ukraine’s infrastructure by use of cyber-attacks, but this has not happened.

We gave help on cyber before the war started and it has worked.  Why did we not do so with weapons?  Surely, we need to learn the lesson here – namely that prevention is better than cure.  The US has provided the Javelin anti-tank system to Georgia, but we have not sent arms.  Let’s not make the same mistake again and let’s give Georgia the weapons they need.

It’s also important to note that the strategic issues for the UK and the West do go beyond Ukraine in terms of the wider Black Sea region.  For instance, if we take the issue of possible Ukrainian neutrality, subject to a referendum, as has apparently been mooted by President Zelensky at the Istanbul peace talks.

It may be that a heavily armed Swiss type neutrality might work for a very large and populated country like Ukraine.  But that is not the case for Georgia which is small geographically and with a small population.  Indeed, the ground taken by Russia on the first day of their February offensive, was more than exists in the whole of Georgia.  So, Georgia’s long term security is considered by the Georgians to be effectively bound up in joining the Nato umbrella – not neutrality. If Ukraine were to go neutral, then Russia’s attention would be drawn to Georgia – possibly with disastrous implications for Georgian security.

The war sacrifices and sufferings of the Ukrainian people since 2014, as for Georgia since 2008, have been immense and totally unjustified.  I hope that our ministers are looking at the clear pattern established by Russia and are learning the lessons of our earlier years of relative inaction – so that we can now stop the rot coming out of Russia from spreading further. 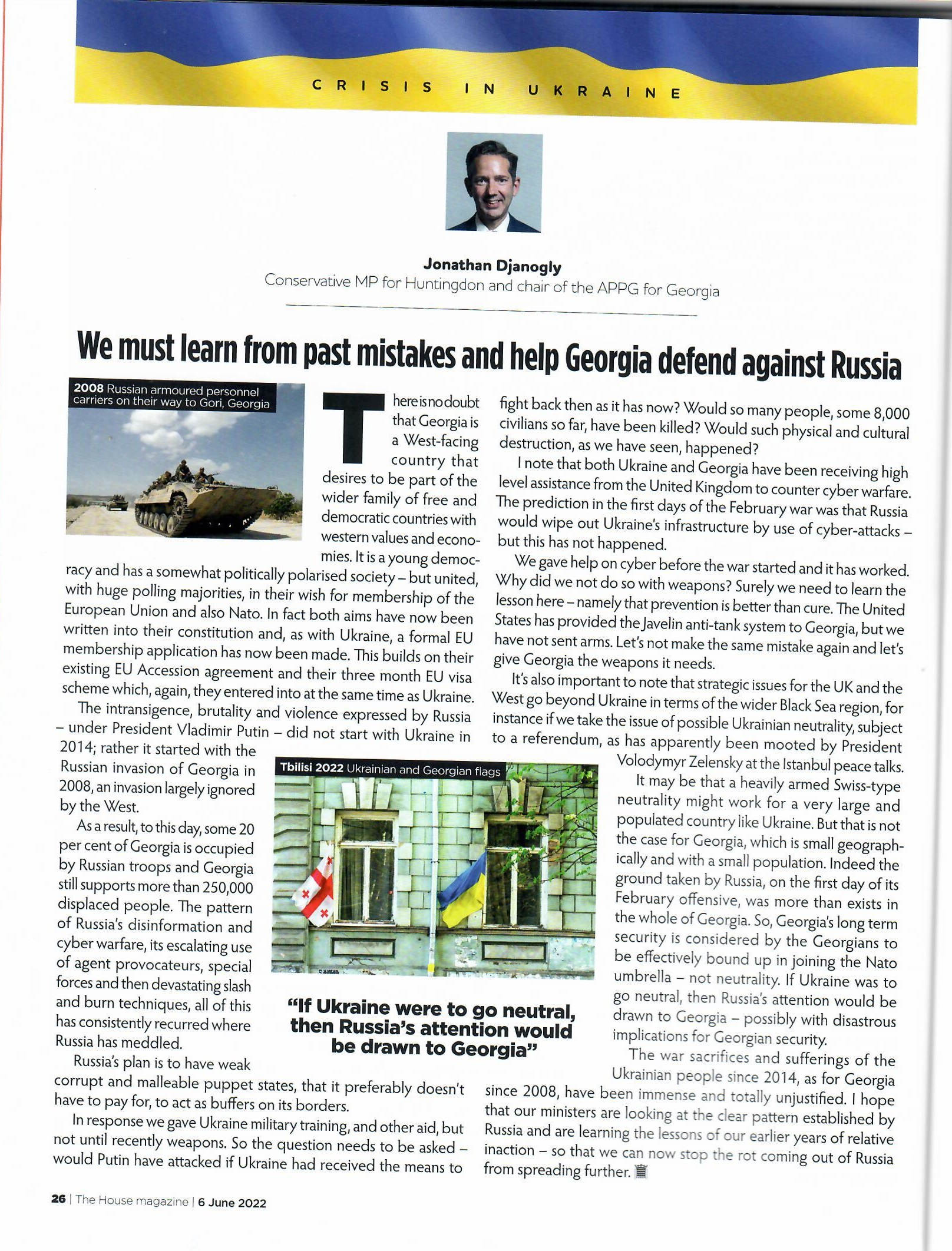