Jonathan Djanogly joined fellow MPs and other guests at a ‘meat the future’ at event hosted by UK start-up Ivy Farm Technologies and the Good Food Institute Europe. 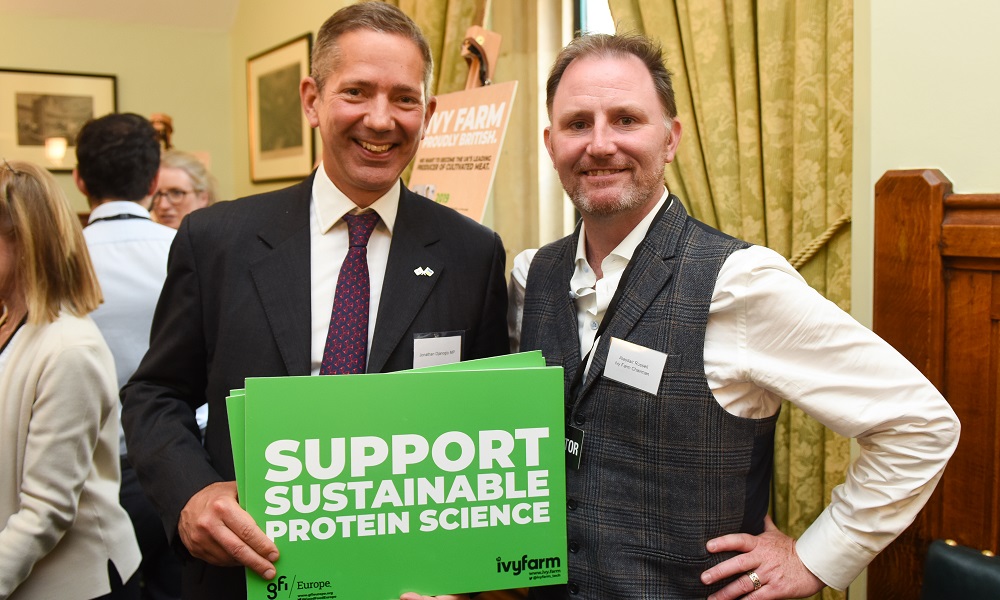 MPs and peers from all parties joined scientists and innovators to learn more about the environmental, economic and wider opportunities presented by the cultivated meat sector at a drop-in event in Parliament on Wednesday.

Jonathan Djanogly MP joined leading British cultivated meat start-up Ivy Farm Technologies and the Good Food Institute Europe to learn more about the science and discuss the need for an enabling regulatory framework so Britain can establish itself as a ‘world-leader’ in the sector. Cultivated meat is the same as conventional beef, pork, chicken and seafood – but grown from animal cells.

Guests at the event, which was hosted by Anthony Browne (MP for South Cambridgeshire), heard from Ivy Farm co-founder Dr Russ Tucker and Elena Walden, Policy Manager at the Good Food Institute Europe, about how cultivated meat has the potential to be a gamechanger, for the climate, for food security and for the UK economy as a future world leader in a booming alternative protein sector.

The reception provided the opportunity to hear from key players in this burgeoning sector, and to discuss how UK regulation and additional public R&D investment is vital to enable its growth. Speakers included Peter Quigley, Deputy Director of Regulatory Services (Interim) at Food Standards Agency, the regulator which has oversight over novel foods in the UK. Other companies in this space were also present, including representatives from Roslin Technologies, Multus Media and CellulaREvolution.

Dr Tucker, whose company uses technology developed at Oxford University with the goal of becoming the UK’s first commercial producer of sustainable cultivated meat, highlighted the enormous benefits of supporting the sector in the UK. Cultivated meat causes up to 92% less carbon emissions, requires up to 95% less land than conventional livestock farming and is also free from antibiotics.

Dr Tucker and Elena Walden spoke about how this technology has the potential to be transformative for our food future. By reducing our reliance on importing meat, we can build a better UK economy, strengthen our food security, support UK farmers to move away from industrial farming and meet our climate targets. The sector also has the potential to contribute up to £523m in tax revenue and contribute £2.1bn to our economy by 2030. Research by Oxford Economics suggests the industry can create almost 16,500 jobs, including 8,300 highly skilled jobs over the next decade.

Speakers were clear that in order for cultivated meat businesses to thrive in Britain, policymakers will need to ensure a supportive regulatory environment and invest in open-access research, cautioning that the UK is in danger of being left behind. Singapore granted regulatory approval for a cultivated meat product in 2020, China has committed to develop the sector in their five year agricultural roadmap, and the US, Netherlands and Israel are also investing heavily. As the Government’s recent policy paper on ‘The Benefits of Brexit’ set out, the UK has the opportunity to develop science-based regulation and reap the

“It was fantastic to welcome guests to the event this week and discuss the potential of cultivated meat as a sector. The work we are doing at Ivy Farm to find a new way to produce meat will be better for people, the planet and animals. What’s crucial is that the regulatory framework is there to support the growth of this sector and make the UK a world-leader in food technology.”

“It’s brilliant to see so many MPs recognising the potential of cultivated meat to provide more sustainable food choices and create green jobs across the UK. To meet our climate targets and capitalise on the full benefits, the government must invest in open-access research, accelerating progress just as they have with renewable energy.”